And I mean this is the most non-parison of ways, because some of my liberal friends are as filled with hatred and venom as my conservative ones. Why give over our lives to love when the world doesn’t want it? Why would the world NOT want a glimpse of simple yet elegant beauty? Why would it NOT want the mysterious, the extraordinary?

Why would it NOT want the intimate passion and fidelity of God that is at the same time very personal and very communal? Why would the world NOT want a hint of the blessed eternal, the perspective of a love that transcends all obstacles and suffers all wounds for our sake and for the sake of neighbor? Why does the world not want that?

Today we remember the Epiphany. The actual day of Epiphany was last Wednesday, an irony that is not at all lost on me. We remember how a group of mysterious foreigners, aliens if you will, gazed at the stars and let themselves be drawn into awe. They let themselves be drawn into something wholly beyond their understanding and they did it together! No, not just one crazy star gazer telling herself delusional stories, but a whole group of them!

A whole group of star gazers, dreamers, let themselves not only be drawn into the awe of the Divine, but let themselves feel gratitude, so much gratitude that they gathered their treasures up to lay at the feet of Jesus. They let something wholly outside of themselves and their understanding woo them to travel across miles and risk their well-being for the adventure of finding the One for whom the star materialized and became real to the naked eye.

Again, why does the world not want this kind of transcendence, awe, gratitude, adventure, and experience of that which is greater than us being so very, very good?

It is a little like this. I love Swiss Chard. I love it. I was introduced to it by a friend and I love it. It takes five minutes to make and it is delicious and nutritious. Why would I spend 20 minutes on baking a pan of brownies, something not good for me, instead of making the chard that is right there in the fridge? Why would I go out of my way to buy eggs and oil to make the brownies if the chard is right there?

Why don’t I choose the good? Why indeed. Brownies are counterfeit chard. They taste good, but they aren’t good.

We settle for political power, violence, force, shaming others, playing games like nepotism, cronyism, sexism, and racism. We create class and caste systems, elaborate mazes of hoarding resources and establish secret societies with convoluted rules. Those are all counterfeit games of lesser beings, not Holy Currencies. Not Holy Currencies utilized for the good of all. We settle for counterfeit currencies, thinking it will be enough. And of course it is never enough.

Martin Luther said it, half in German, half in Latin, “Wir sein Pettler, Hoc est Verum.” Wir sein Pettler. We’re all beggars. We are all well-meaning fools grasping after vapor, grasping after a commodity that evaporates the second we catch hold of it. How can we be a little more Magi and a little less Pettler? A little less well-meaning fool? How did the Magi get to be that way?

I came across a really interesting guy this week named Professor Eric Dodson. He’s retired now, but he does these videos and they are really thought-provoking. He said something that really struck me, that if we want to reclaim this reality for the sacred, we must become….spiritual secret agents.

Secret agents, really? I mean, this pulls us right out of the Magi mystique, doesn’t it? When I think of secret agent, I think Dick Tracy, James Bond, Maxwell Smart, secret agent man.

But stay with me, a spiritual secret agent, a Magus if you will, has a foot in both worlds. One in the real here and now, and one the vast reality of God.

James Bond has one foot in Mother England and another wherever his Queen sends him…Ethiopia, Greece, Eritrea, wherever.

We as Christians have one foot on this Earth with all of its counterfeit currency and its violence and jockeying for position. The other foot is squarely planted in the awe of God’s transcending love. It makes sense. If we are only in the awe of God’s transcending love, we start to sound a little…..loony. We start to say things that make people question our sanity, and for good reason. Because God is truly other. God is truly beyond, truly not counterfeit, truly not petty. The more we steep in God-space the more we will sound weird to the rest of the well-meaning fools. But they can handle it, don’t worry about it.

Now, the key about keeping one foot in reality is that you don’t join the game. You see it. You know it is there. You recognize the game for what it is. You can even make fun of it now and again if that helps. You acknowledge and notice that the counterfeit currency is the name of the game here on Earth. Like, I notice that I want the brownies, but in the end I decide not to choose them.

This way, this Spiritual Secret Agent way of having your feet firmly planted means that you can proclaim this reality and the reality of God to be all God’s. You can actually proclaim God’s perspective of eternity BECAUSE you aren’t imposing yourself, your wants, your ego onto anything. You don’t have to win a counterfeit game, God has already won the only reality that is enough. Solo Dios Basta. Only God is enough.

Whew, I know that’s a lot. Especially this week, when it looks like we’re all going over the rails. But believe me, you will be hearing more about St. Stephen’s Society of Spiritual Secret Agents (SSSSAh for short) in the future. BECAUSE loving a world that doesn’t want to be loved is what God’s all about. It’s what we’re all about. Amen. 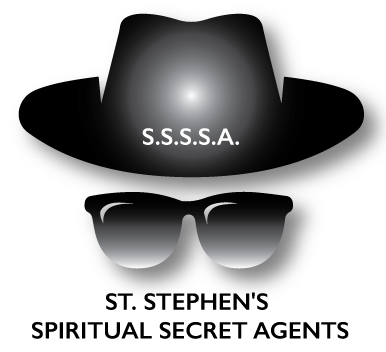